I was made an offer that I definitely could refuse.

Some time ago a "friend" (and I use that term loosely) added me to Facebook. I had not talked to this person for about 4 or 5 years and knew him through a friend of mine. He's always been slightly strange and pervy, but I thought...what's the harm.
He would message me a lot and compliment me (which basically consisted of making me feel uncomfortable). He became increasingly creepy.
One day he wanted to ask me a "weird question".
"Shoot" I said.
"Would you watch a relatively good looking guy masturbate for $1000? You don't have to do anything, you just have to watch."
I paused. All I could think was...I really hope this is hypothetical.
"I don't think so." I replied
"You don't have to do anything to yourself. All I want you to do is watch."
Now I'm starting to think this is not hypothetical. And I'm starting to get disgusted and angry.
"No. You're right that was a weird question. Please don't ask me that again."
"Just thought I'd check."
"Maybe you should try Chat Roulette. I heard people do that all the time on there."
And that was the end of that conversation. Or so I thought.
I should have deleted him after that comment. But I didn't. And about a week ago, he upped the offer.
"Are you sure you couldn't use an extra $3000?"
"No."
Remove from friends.
This was wrong on so many levels.
First of all. I barely know the guy.
Second, why would you pay someone for that? Can't you get that on your own?
Third, ewwwwww. And, asking me that is completely offensive. I know I'm a starving student and all, but come on.
I don't understand what a person gets out of that. It's just as bad as those men who go around in trenchcoats popping out from behind dumpsters and just go to town on themselves. Excuse me sir, but I'm just heading to get a coffee, and I don't remember asking for extra cream.
I told this story to my mom and all she could say was "I don't know dear, $1000 is a lot of money." I mean make it $5000 and then we'll talk. I could've had a very Merry Christmas indeed. 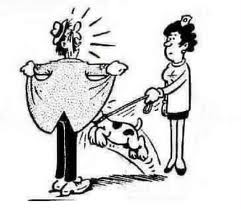