Everybody loves gossip. Don't try and deny that you're one of those people that does not and will not partake in talking about other people. Humans are nosy creatures. We like to know what's going on in other people's lives. Which is probably why TMZ, Perez Hilton and trashy celeb magazines make a killing. We don't know the people they're talking about and yet we're enthralled. Can't get enough of what's going on in their lives. When gossip comes around about someone we do actually know and is in our lives, the better. It's so much more juicy.

Men love it too. Over and over all I hear from men is "You women are so gossipy. Always talking about other people..." Excuse me, but in my experience, men love gossip just as much. Most of the stuff I hear comes from the mouths of my male friends and family. But I will admit, men may gossip but they will usually just tell you the facts. Women will gossip and attach their opinion to something. This is when innocent gossip turns into rumours. In my opinion (which is usually right, let's be honest here), gossip is more about something you heard (which may or may not be true), but rumours usually have a meaner side to them. This is when they start to mold into something slightly (or completely) different from what they started as. It still baffles me as to where this starts. Much like the telephone game we played as kids. You start off with something completely innocent and it magically transforms into some sort of dirty or illicit thing. 'Purple monkey dishwasher' become 'Paul like it in the washroom.' Neither one really makes sense.

I wouldn't consider myself a 'gossip' by any means, but yes, I like to know what's going on in the lives of my friends and family. I am admittedly nosy. I like to be kept in the loop. I would of course never spread vicious or mean things about people and if it's a secret - I'm basically a vault. (I say basically because alcohol seems to loosen the door to the vault slightly - but normally only on my own hidden secrets.) Which is a good thing, because friends, acquaintances, even strangers seem to like to tell me things I don't really want to know. There have been times where people I have literally known for barely an hour blurt out secrets to me. Maybe they just needed to get it off their chest and I seemed like a safe choice. Luckily I also have a memory of a goldfish so I will probably forget about the massive secret within seconds and continue on. I probably should have went into psychiatry to get paid the big bucks to listen to people unload, I might've been a millionaire by now.

It's not very often that I hear about rumours going around about me. Which is a great thing! Nothing is worse than someone asking you about a ridiculous rumour that they heard from someone. I'm sure we've all had at least one moment where your friends ask you about something that doesn't make sense or sound like something you would do. It goes somewhat along these lines:


Usually I just laugh about these things that happen. It does bother me a little that people are talking about me a little bit but it's not usually bad and if it seems ridiculous at least I know people wouldn't believe it (or I hope they wouldn't!)

Living in a small town/rural area you're bound to have this happen to you. Even if you don't know the person of subject, your Grandparents probably do and their hairdresser heard about it from your aunt's friend because you're friends with her daughter. Seriously, hairdressers also know an obscene amount of information. Hairdressers and manicurists could rule the world with what they know. 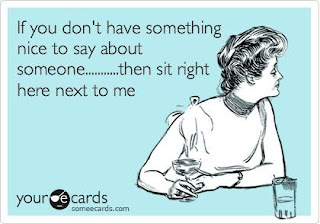